It was Senior Day, and if you want to read some things about our graduating Seniors, feel free to read the preview.

Things looked dire in the early going as Marin Maric picked up 2 early fouls and Max Strus picked up 3 fouls with 8:43 to go in the 1st Half.  Strus picked up 2 fouls on one play when he clearly charged into the Xavier defender and then kept talking to the referee.

In the arena, I was pretty sure that it must have been a block for Strus to be so upset, but after having time to watch multiple angles of the various replays, it was about as clear a charge as you will ever see.

When your two most reliable offensive players are out of the game, and you see that the Demons were down by 12 (22-10), it sure felt like game over.  However, the lineup of Hanel, McCallum, Cyrus, Roberts, and Cain, scored on 5 consecutive shots, closing the gap to 2 points (25-23).

Down 22-10 with Strus and Maric out with foul trouble, this lineup of McCallum, Hanel, Roberts, Cyrus, and Cain make 5 consecutive shots to bring it to 25-23. Kept #DePaul in the game against #Xavier. #dpubb pic.twitter.com/Y3LWB6iZIC

This stretch allowed DePaul to make it to the much needed break, only down by 6.

The second half started with everyone expecting Xavier to go on a run.  It never really came.  The most they ever got up was 11 points with 11:38 to go.  The Demons just stuck around, waiting for their chance to close the gap.

That chance occurred in the final 4:47 of the game with DePaul down 8.  The Blue Demons locked the Musketeers down and pecked away at the score.

The soul basket by the X-men was this beautiful back screen curl by JP Macura.

O’Mara hit him perfectly, and Cyrus and McCallum failed in communication.

The only points made by #Xavier in the last 4:47. #DePaul locked them down for nearly 5 minutes sans this great cut by Macura. pic.twitter.com/reUX8fDU1R

Then DePaul methodically cut into the lead with a jumper made by DePaul’s player of the game, Brandon Cyrus, with 3:57 left.  Cain made a glorius 3 point play with 2:23 to close the lead to 3.  McCallum made the front end and bonus of a one-and-one to get it to 1.  Macura made his shot, which brought the game to the final series of plays that determined the outcome.

The key plays in the last 1:15 of the game. Panic pass by Strus leads to TO, steal by Strus to Cyrus which gets blocked, and finally, Cain and Strus miss possible tying shots. Brutal season in last minute possessions. #DePaul #dpubb pic.twitter.com/v2bu6si77B

There were quite a few blue seats, but it felt pretty full, especially with Xavier fans.  Both fan bases got loud at different points in the game.

Obviously, DePaul beat the spread, which was 7.5,  Kenpom expected a 7 point Xavier victory.  If you had the under, you were a happy human.

The Player of the Game:  Brandon Cyrus 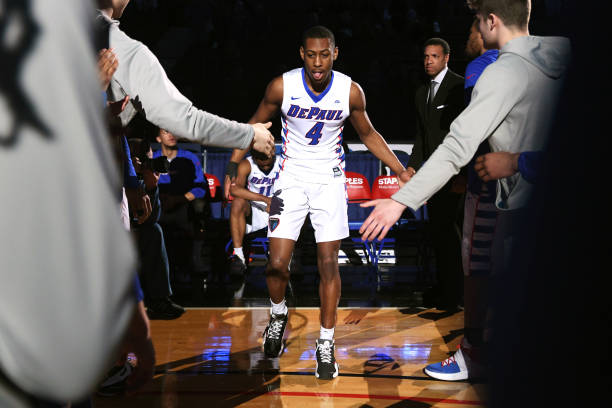 Xavier won the game, and generally, I award this to a player on the winning team, but Brandon Cyrus had an absolutely awesome game.  I have bashed his offense all year, but today he had it working.  He had a game high offensive rating of 135, and considering his ample usage, it was spectacular.  He scored nearly a 1/3 of all of DePaul’s points.

He played 37 minutes and put up a career high 20 points on 8-14 shooting including 2-4 from the 3 point line.  He had 5 rebounds, 2 assists, and zero turnovers.  Without his efforts, this game would’ve been over before halftime.

Cain had a very steady game, with 4 assists and 1 turnover.  He had an above average offensive rating of 106, but in a game when Strus was clearly not himself, Cain’s calming influence nearly won the game.

DePaul only had 11 turnovers.  5 of which came via Max Strus.  The rest of the team had 11 assists and only 6 turnovers.  The last time around against Xavier, the Blue Boys had 23 turnovers.

By far, Max Strus’s worst game of the year.  He had an Offensive Rating of 48 (100 is average).  He was frustrated.  Strus lost his temper in the first half which resulted in him picking up a charge and a technical foul resulting in 3 fouls.  This was the same guy who went for 33 the last time DePaul played Xavier.

An awful 1-9 from 3 point land doomed the Demons.

He played 36 minutes but had very little impact other than this awesome sequence in the 1st half.

Slow-Mo of McCallum's back to back baskets during the run. #DePaul #dpubb pic.twitter.com/UxklHs6azw

DePaul was out rebounded by the Musketeers, 39-27.  This made up for the turnover advantage by DePaul.  Reasons behind the descrepancy include, Strus’s absence, Maric’s 1st have foul trouble, and Jaylen Butz being clearly ineffective.  I am pretty sure that Butz is coming off of a knee injury.  The staff has been super quiet about him and it has lead to lots of speculation on Butz’s future.  Well, guess what, maybe he has had a knee injury.  He was not explosive whatsoever.  In 9 minutes of play he had zero rebounds, 2 turnovers and 4 fouls.

One rebound between Butz, Joe Hanel, and Paul Reed in 17 total minutes of play.  That killed the Demons.

6th Year Senior Peter Ryckbosch was dressed to the nines for the evening, and had a knee brace.  I felt so bad for the guy.  From the outside, he has always looked like a positive influence.  He and Joe Hanel, along with other walk-ons have at times brought a fun culture, a supportive culture, and a thoughtful culture.  I will miss both him and Hanel more than most departing Demons.

Tweets of the Game

Leitao took over a 6 conference win team and after 3 years got them to 4 wins and BACK TO BACK last place finishes! DePaul fans deserve better.

I’ll Have What He Is Drinking

This might sound crazy, but DePaul is capable of making noise in the Big East Tournament. They have played a lot of good teams tough and today is another example. Sleeping on the Blue Demons is a huge mistake. #BIGEASThoops

Looking For Just a Tiny Bit of Accountability, That’s All

Exactly. How else does an Athletic Director survive 11 years of sub .500 seasons. No accountability. #depaul #FireJLP https://t.co/i90OTN9KxU

Been a While Since DePaul Beat a Top Ten Opponent

DePaul is 0-32 vs AP top-10 teams in the last 10 seasons. @DePaulAthletics @DePaulU @DePaulSID did you hear that? It’s Coach Ray rolling over in his grave. #TheOnlySolaceICanTakeIsThatCoachRayIsntAroundToSeeTheDumpsterJLPHasCreatedWithTheProgramHeBuilt #FireJLP

Never Forget, “You are What Your Record Says You Are” -Bill Parcells

“You are what your record says you are”- Bill Parcells. One of the winningest coaches of all time. The anti Leitao/Purnell/Wainwright

I Want to Leave it With a Nice Tweet From Paul Steeno About What Leitao Said About Hanel and Ryckbosch.  They will be Missed.

Transcribed quote of Leitao on Joe Hanel and Peter Ryckbosch bc I think it's a pretty powerful testament to what they meant to the program #BlueDreamin #DePaul pic.twitter.com/j7PMR6t1yK

We let another top team off the hook.  We expected to lose, and we should have won.

Make a Lazy Blue Demon Happy and Share this:

View all posts by PatrickSperry